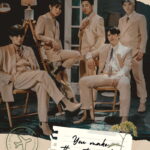 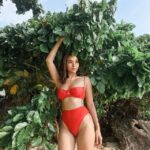 Defining the Age of Influence

Laureen Uy and Rei Germar show how content creation has evolved over the past few years.

Wearing a cream polo over a dark bikini top — what she calls her “Zoom beach lewk” in a later Instagram caption — Laureen Uy speaks to me via video call while on vacation in La Union. Over the calming background sounds of ocean waves, Laureen tells me that she and her boyfriend Miggy Cruz are there to celebrate their anniversary.

She doesn’t go into specifics, but there’s really no need for me to ask — over the next few days, I piece it all together from the posts on her Instagram and her YouTube channel: that they’re fully vaccinated and celebrating their fourth anniversary in the surf town because their El Nido trip was canceled, and that the Fatwave Surf Resort is their new favorite spot to relax and eat.

While Rei Germar dressed in a casual tank top and shorts, the vlogger takes the call at her family home in Bulacan after visiting the location of her soon-to-open K-BBQ restaurant. “Most people don’t know about this [business] yet but they’ll know tomorrow when I post the vlog,” she assures me. This is something I confirm the next day when I watch her tour the still-unfinished location in her latest video alongside clips of the rest of her day (a snippet of our interview included).

This bare-it-all, ‘authentic’ style, I observe, is a major characteristic of content creation in 2021.

The era of the fashion blogger
With the advent of Instagram, YouTube, and TikTok, it’s hard to imagine a time when it wasn’t the norm to stay updated on the lives of strangers who don’t fall under the traditional definition of celebrities. And now that algorithm-driven feeds of these platforms specifically cater to the kinds of content we want to see, it’s even harder to imagine visiting a blog just to read about one person.

For a good number of veterans like Laureen, the personal blog format served as their first foray into the world of content creation. Laureen started her fashion blog, aptly called Break My Style, in 2010 as a visual diary to document her style experiments. At the time, there weren’t that many Filipino style bloggers based here, so she would look to pioneers like Bryanboy and Rumi Neely for inspiration for her curated posts. Her eccentric style and fashion know-how eventually earned her a sizable following, which then translated to opportunities that helped her pursue it as a full-time career.

Of course, Laureen says that running the blog even back then involved “a lot of effort” that followers weren’t aware of because all they would see were the pristine images on her final posts. “I was like a one-man editorial team,” she says while recalling her old blogging process. It wasn’t as simple as taking a photo and uploading. Using a digital camera and the default interface of WordPress, she would take photos of all the elements and details of the day’s ‘look’ and supplement them with a few paragraphs (“a whole story; not just captions!” she stresses) about the inspiration behind it.

Laureen stopped posting on Break My Style in 2019, migrating fully to Instagram and YouTube, but she still keeps the website online in case she wants to check out her old posts. And while she feels that she’s finally found her personal aesthetic, she credits the blog and the audience she gained from it for inspiring her. “I guess the more readers, or the more subscribers or followers you have, the more inspired I get to actually create more content and more beautiful pictures,” she says.

“Comparing how I used to take photos back then and now, I feel like it’s still the same. It’s just that more people around me are taking photos too,” she adds.

Checks and balances
Rei credits the Divi video, which as of this writing has over 895,008 views, with leading her to loyal subscribers, whom she fondly calls her FamiREI. “For me, when you start being 100 percent genuine, you attract the right people for you. Those people who hate you — those are not your market,” she says of how she sees the good outweigh the bad in that situation.

Rei now has 1.5 million subscribers on her channel who regularly leave positive comments and constructive criticism on her videos. She treasures them dearly. “I won’t be where I am today without them. And I’m not just talking about the numbers, but it’s more of my personal growth as well,” says Rei. “I’m literally growing with them. But as much as I am there to guide them, to give them advice, they’re also there when I need it.”

Laureen is also hyper-aware that she’s the source of entertainment for her followers (she calls them ‘Lauvers’). In fact, it was because of them that her approach to creating also changed over the past year — a move that included making a TikTok account despite her earlier resistance to the platform. “After a long day of work or schooling, a lot of people really just wanna enjoy. Since we have no place to go, people are just on their phones. My main purpose was ‘how do I entertain people and make them smile despite everything that’s happening?’” she says of her TikTok content, which includes her now-signature style transition videos and comedy bits.

Here’s some behind the scenes of their shoot:

THIS VIRAL GROUP IS RISING: SB19